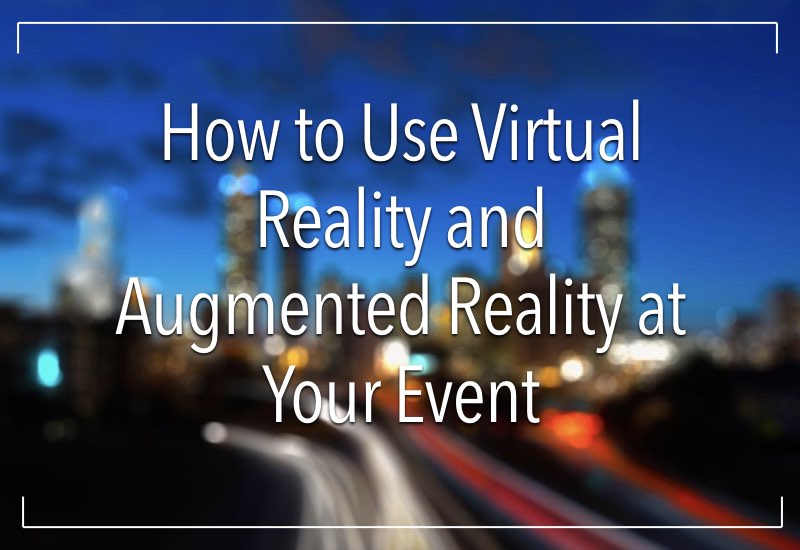 If you’re a meeting planner or an event planner, you’re probably interested in learning about new technologies you can introduce to your conferences or events. Virtual reality and augmented reality are two of those technologies, and they can have an impact on how attendees engage with your event.

But what exactly are augmented reality and virtual reality, and what do they do? Here are some answers to those questions.

VR and AR are not the same

Virtual reality is best described as a completely immersive experience in simulated reality, whereas augmented reality combines both virtual and real. In most cases, VR uses goggles to create an entirely different world for the user. AR actually augments what people see through their mobile device screen. In other words, AR is actually applied over what’s been seen on screen.

Although AR and VR have their differences, meeting planners and event planners should recognize that both realities have the potential to alter the way people engage with your event.

By definition, Augmented reality is described as “an enhanced version of reality created by the use of technology to add digital information on an image of something.” This reality works in a way that allows developers to create images within applications that combine it with real world contents. AR allows its users to interact with virtual content in the real world and provides users the ability to distinguish between the two.

How to Use AR at Your Business Event

Device-based AR: With this platform, consumers use a tablet or smartphone to interact with the AR which uses their screen as a type of “window” into an augmented view of the consumers environment.

Mirror AR: This option uses a mirror-like reflection that allows the user to see themselves with additional imagery or content on top of it. This type of AR has been used most commonly for retail and consumer environments.

For example, mirror AR can be created on a large screen to create a theatre like environment or to create exciting moments for users, such as showing characters interacting with the users reflection. Photo technology can also be implemented that gives users the ability to save and share their augmented image.

Transparent AR: As one of the newest forms of augmented reality, transparent AR uses transparent LED or OLED displays as a window into a three-dimensional, virtual environment. This can be especially useful in large group environments such as trade shows. Companies can now display the AR to a group of people who can watch someone touch, move, and demo the product.

Virtual reality is best described as the use of technology to create an entirely simulated environment for users. When you use VR technology, you are viewing a completely different reality than your own. VR can be an artificial environment, or a real place that has been documented and implemented into a VR app. VR allows users to move around and look in all directions as if you were physically there.

How to use VR at your event

VR gamification for engagement withusers: Image recognition and VR technology have made it easier than ever to create games for your events. For example, place virtual clues around your trade show booth and allow users to interact with virtual content to win prizes.

360 VR meetings: 360 degree cameras gives consumers the ability to attend events remotely. This makes it so users are able to see others in the room as if they were actually there.

Become a robotic VR attendee: If you are unable to make it to an event due to travel or other restrictions, VR allows users to attend these events via robotic virtual reality.

As a meeting planner or event planner, the question comes down to this — should you incorporate VR and AR into your events? That depends on the sensibilities of your attendees and what you’re trying to accomplish. Events that are more serious or subdued in nature probably want to steer clear of VR and AR because they’ll be a distraction. But any event that wants to add a little spice and engagement to their event should definitely check it out.

About the Author: Jamie Turner is an internationally-recognized author, speaker, and CEO. You’ll find him on the 60 Second Marketer and as an expert commentator on network TV. He is also the founder of SIXTY, a marketing consultancy and advisory firm that helps clients get more bang for their marketing buck.